Hobsbawm‘s opening chapter is a dazzling survey of the world (specifically, the European world) on the eve of the “dual revolution”. He sketches out the forces and relations of production and shows how intellectual and political structures and developments derived from this economic base. This is a dynamic picture of a world in flux and on the brink of revolutionary change – poised between old forces and new, dynamic elements and static, governed by a political order rendered obsolete by economic change. In short, this is a magnificent application of the method of Karl Marx to elucidate, to understand, and to explain. 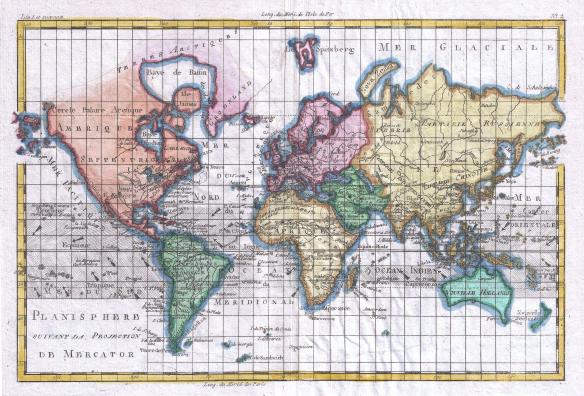 “The first thing to observe about the world in the 1780s is that it was at once much smaller and much larger than ours.”

Smaller in the geographical sense that only patches of the inhabited globe were known, even to the most erudite; “The ‘known worlds’ of less scientifically advanced and expansionist communities than those of Western Europe were clearly even smaller, diminishing to the tiny segments of the earth within which the illiterate Sicilian peasant or the cultivator in the Burmese hills lived out his [sic] life, and beyond which all was and always would forever be unknown.” Smaller also demographically – the world’s population had tripled between the 1780s and 1962 (when Hobsbawm wrote), and it has more than doubled again in the subsequent decades. The world was emptier, the climate colder and wetter. Humanity, too, was smaller – we can quantify this from statistics about the physique of military conscripts – “in one canton on the Ligurian coast 72% of the recruits in 1792-9 were less than 1.50 metres tall.” As Hobsbawm notes:

“That did not mean that the men [jarringly, Hobsbawm does not refer to women at any point in this chapter] of the later 18th century were more fragile than we are. The scrawny, stunted, undrilled soldiers of the French Revolution were capable of a physical endurance equalled today only by the undersized guerrillas in colonial mountains. A week’s unbroken marching, with full equipment, at the rate of 30 miles a day, was common.”

Larger, in that “the sheer difficulty or uncertainty of communications made it in practice much vaster than it is today.” By comparison with medieval or 16th century standards, communication for individuals and for information was “abundant and speedy”. But “for the greater part of the world the speed of the carter walking beside his horse or mule governed land transport”. Communication by water was easier, cheaper, faster: “to be within reach of a port was to be within reach of the world…Boston and New York were in much closer contact with Paris than, let us say, the Carpathian country of Maramaros was with Budapest.” Rural hinterlands were cut off from the rapid flow of information between capitals: “The news of the fall of the Bastille reached the populace of Madrid within 13 days; but in Péronne, a bare 133km from the capital, the news from Paris was not received until the 28th [after 14 days].”

“The world of 1789 was therefore, for most of its inhabitants, incalculably vast. Most of them, unless snatched away by some awful hazard, such as military recruitment, lived and died in the county, and often in the parish, of their birth…The rest of the globe was a matter of government agents and rumour.”

“[T]he world of 1789 was overwhelmingly rural, and nobody can understand it who has not absorbed this fundamental fact.” Roughly, at least 80% of the population were countrymen across Europe; even England saw the urban population outnumber the rural population for the first time only in 1851.

By “urban”, with the exception of a handful of truly large cities (London and Paris at the forefront), we mean generally small provincial towns with a few thousand inhabitants. “But these were also the towns out of which the ardent and ambitious young men came to make revolutions or their first million; or both. Robespierre came out of Arras, Gracchus Babeuf out of Saint-Quentin, Napoleon out of Ajaccio.” The line between these towns and their rural hinterlands was in some ways sharply demarcated – by contempt for rural slowness and idiocy; by a clear division in occupations; by dress and even by physique. But the provincial towns were still “almost as ignorant of what went on outside their immediate district”, and essentially still belonged to the rural economy and society: “it lived by battening on the surrounding peasantry and…by very little else except taking in its own washing.” Stubbornly defending its local monopoly of the market, “the provincial town of the late 18th century might be a prosperous and expanding community, as its townscape, dominated by stone buildings in a modest classical or rococo style still bears witness in parts of Western Europe. But that prosperity came from the countryside.”

Three zones can be identified within the economic sphere centred on western Europe. In the overseas colonies (with the important exception of the northern USA), the typical cultivator was unfree and under political constraint: “Negro” slaves and Indian forced labourers or virtual serfs. The landlord was either the owner of a primitive, self-contained estate, or of a plantation producing export crops such as sugar (“the most importance foodstuff imported from the tropics and the one whose sweetness has created more human bitterness than any other”), tobacco, coffee, and of vital importance to the Industrial Revolution, cotton – and thus an integral part of the European economy.

In Europe east of the Elbe (and also in parts of Spain and Italy), agrarian serfdom dominated. Cultivators were unfree, serfs compelled to labour for significant portions of their week on their lord’s land – often so unfree as to be virtually chattels, as in Russia. This zone can “be regarded as a food and raw-material producing ‘dependent economy’ of Western Europe.” Characteristically the landlord was a noble owner and cultivator or exploiter of large estates whose “vastness staggers the imagination”. Below these magnates of princely wealth existed a class of country gentlemen of varying size and economic resources – comprising as much as 10% of the total population in some areas.

In western Europe, the overall pattern was broadly similar. The distinguishing status of the “gentleman” estate owner still conferred membership of the ruling class: social status and access to political power, a position that was still aggressively asserted, while economically the feudal order was increasingly obsolete. The position of the cultivators was fundamentally different from the servile zone: although marks of legal dependence remained, cultivation was in the hands of non-servile peasants, either rent-paying tenants or freeholders owing obligations which were generally redeemable in cash. Medium and small peasants operated roughly at the level of self-sufficiency, while a minority of wealth peasants were selling surpluses to the urban market. Here the estate had become a system of collecting rent rather than a unit of economic enterprise.

Steps towards a purely capitalist agriculture were most advanced in England, where the characteristic cultivator was a medium-sized commercial tenant farmer operating with hired labourers – a class of agricultural entrepreneurs and agricultural proletarians was emerging.

Technologically, farming was traditional and “astonishingly inefficient”. The products of the land were broadly traditional, with some new crops entering from the New World such as maize, rice and the potato; the products of other climates remained a rare luxury. “The world of agriculture was sluggish”, although not wholly stagnant – agrarian expansion had gone hand-in-hand, from around 1750, with the beginning of the startling and as-yet unchecked growth in population that characterises the modern age.

The bourgeoisie and the Enlightenment

By contrast, “the world of commerce, manufactures, and the technological and intellectual activities which went with both, was confident, brisk and expansive, and the classes which benefited from them, active, determined and optimistic.” Vast and increasingly dense trade circuits moved slaves, plantation products, manufactures and commodities around the globe and between the developed western European economies and their eastern hinterlands.

The merchant remained the “chief controllers” of rapidly expanding mining and manufacture (with manufacturers themselves a poor relation) because of the dominance of the decentralised “domestic” or “putting-out” system of industrial production, “in which the merchant bought the products of the handicraftsmen or of the part-time non-agricultural labour of the peasantry for sale in a wider market….The mere growth of such trade inevitably created rudimentary conditions for an early industrial capitalism”.

“The activities of commerce and manufacture flourished brilliantly”, in particular that of “the most brilliantly successfully of 18th century European states, Britain.” The intellectual development of the Enlightenment “drew its strength primarily from the evident progress of production, trade, and the economic and scientific rationality believed to be associated inevitably with both.”

The Enlightenment, although in theory an ideology of universal emancipation (“all progressive, rationalist and humanist ideologies are implicit in it, and indeed came out of it”), in practice was championed by the middle ranks of society and “the social order which would emerge from their activities would be a bourgeois and capitalist one”. Individualist, progressivist, and seeking to sweep away the shackles of medieval tradition, superstition and irrational social forms, and – not coincidentally – centred on the very foci of the dual revolution (France and England) the Enlightenment was implicitly the revolutionary ideology of the bourgeois revolution.

With the vital exception of Britain, whose revolution had been made in the 17th century, Europe was almost entirely ruled by absolute monarchies: “Hereditary monarchs by the grace of God headed hierarchies of landed nobles, buttressed by the traditional organization and orthodoxy of churches and surrounded by an increasing clutter of institutions which had nothing but a long past to recommend them.” Although the interest of these monarchs might result in limited programmes of “enlightened” measures and the limited promotion of the middle and educated classes, they were ultimately rooted in the “feudal” world and could not accomplish the “root-and-branch social and economic transformation which the progress of the economy required and the rising social groups called for….There was thus a latent, and would soon be an overt, conflict between the forces of the old and the new ‘bourgeois’ society, which could not be settled within the framework of the existing political regimes.”

These regimes were under pressure from three directions: the new forces of the bourgeois world, the entrenched hierarchy of landed nobles, and from foreign rivals. Autonomist movements of remote provinces and colonies were widespread in the decades before 1789 (most notably in the American colonies of Britain), but these were not fatal to the old regimes. “What made the situation explosive was international rivalry”, because the strains of war on the resources of a state were so great. The major rivalry of the 18th century was the recurrent conflict between Britain and France. “Nowhere is the superiority of the new to the old social order more vividly exemplified” not only in the victories of Britain but in the ease with which Britain could organise and finance these wars; the French monarchy was bankrupted and ultimately broken by the ensuing domestic political crisis and revolution.

Europe and the world

The complete political and military domination of the world by Europe (and her overseas prolongations) had not been accomplished by 1789 – it was the product of the age of the dual revolution. China and the great Islamic powers were by no means helpless before European advance, while Africa “remained virtually immune to European penetration”. But the trading, slaving and military activities of European powers were already undermining their social order, and already the significant extension of direct European conquest was under way in India. “The dual revolution was to make European expansion irresistible, though it was also to provide the non-European world with the conditions and equipment for its eventual counter-attack.”