In the second half of the 5th century BCE, the Greeks (or rather, a handful of individual Greeks) started thinking and writing about the past in a new and very different way from the self-aggrandisement of divinely-favoured monarchs discussed in my previous post. The radically different political and social structures of the Greek world – tiny, fiercely independent city-states [poleis] with broadly open political and legal cultures (open, that is, for the male citizen minority – slaves and women were in general firmly subordinated and excluded from public and intellectual life) – gave rise to new methods of thinking and above all arguing that form the foundations of the European intellectual tradition: rhetoric (the art of persuasion with words), logic (the science of argument), philosophy, medicine, tragic drama….and what we can, with hindsight at least, label “history”.

Historia in Greek simply means inquiry, or knowledge acquired by investigation; it is to Herodotus that we owe our modern usage of “history” to refer to a specific type of inquiry about the past. Of the life of Herodotus, almost nothing meaningful is known. We know that he hailed from Halicarnassus (modern Bodrum in Turkey), significantly a city located on the edge of the Greek world that enjoyed close contact with the non-Greek Carian people of the interior, who were subject to the Persian empire. It is evident (probably) from his work that he travelled very widely around the Greek world and the Near East. We believe that he lived from roughly 480 BCE to 425 (or perhaps a decade later). And that is all that can be said with much certainty. More details are presented by ancient biographers, but it is likely (and this is highly typical of such biographical writings) that these details were not known independently but were inferred from the text of Herodotus itself. It is absurd for me to present this ancient bust of Herodotus as there seems little likelihood that it bore any physical resemblance to the man; yet I do so nonetheless.

Herodotus of Halicarnassus here displays his inquiry (historia), so that human achievements may not become forgotten in time, and great and marvellous deeds – some displayed by Greeks, some by barbarians – may not be without their glory; and especially to show why the two peoples fought with each other.

So begins the incomparable work of Herodotus. In simple terms he could be understood as writing a history of the “Persian Wars” (or, better, the Greco-Persian Wars) of 492-479 BCE. In this ultimate David v Goliath showdown (memorialised on film but refracted through the prism of Frank Miller’s deranged right-wing fantasies, in 300) the colossal might of the Persian empire was confronted and defeated by a shaky coalition of 31 Greek city-states, of which Athens (one of the largest) had a population the size of modern Hull and ruled a territory the size of Luxembourg; the smallest, Mycenae, sent her full army of 80 men as her contribution to the war. By contrast, according to Herodotus, the Persian host amounted to 2.5 million men (although modern scholarship would place this figure much closer to 200,000).

But the scope of Herodotus’ historia is vastly greater than a narrative of campaigns and battles. The clue is given in the first sentence – “to show why the two peoples fought with each other”. What we have here is the first known attempt to grapple with that staple of the A level historian’s diet – a question of historical causation which Herodotus attempts to address in broadly secular terms. He goes on from this prefaratory remark to give some possible reasons rooted in myth – the Trojan War, the abductions of Europa and Medea – but then stops and dissociates himself from these myths: “So much for what Persians and Phoenicians say; and I have no intention of passing judgement on its truth or falsity. I prefer to state what I know.” This can be considered to mark the creation of a historical sense in that it delineates historical time and limits the historical narrative within it. Herodotus’ approach to answering his question, however, would not get much credit from an A level examiner – it is far too broad and far too rich. He presents an “interlocking pattern of themes: the rise and fall of rulers; the dangers of expansionism; and the powerful impact of vengeance, divine as well as human, and often across the generations.” (Green 2014) In short, the causes of the war are everything he investigated.

As a result, “the variety of wares at the Herodotean bazaar is truly staggering” (Marincola 1994). Working before the existence of subject boundaries and the “discipline” of “history”, Herodotus ranges freely across what we would now call geography, anthropology, ethnology, zoology, even fable and folklore. His work is a world unto itself. Obviously it is impossible to convey this here, but I will attempt to give a sample. Herodotus evaluates different theories for the flooding of the Nile and puts forward his own. He describes strange species: the crocodile (“pebble-worm”, a word he appears to have coined); the hippopotamus (rather less successfully – Herodotus had clearly never seen a hippopotamus and instead constructs a description of the animal based purely on its name, “river-horse”); and, most peculiarly, a species of winged snakes (“I saw their skeletons in incalculable numbers; they were piled in heaps, some of which were big, others small, others smaller still, and there were many piles of them”). It is not coincidental that all these examples come from Herodotus’ description of Egypt, which clearly exerted a particular fascination for him and indeed for other ancient Greeks, occupying an entire book of the nine into which his work was divided by later editors. He tells of human marvels also: of Arion of Lesbos, thrown from his ship only to be rescued by dolphins and borne to safety; of Cyrus, founder of the Persian empire, exposed in the mountains as a baby to avert a prophecy but rescued and reared by a shepherd family; and of Polykrates, tyrant of Samos, who, at the peak of his powers, threw his most precious ring into the sea in an attempt to avoid the reversal of fortune he feared, only for the ring to be devoured by a fish which was caught, cooked and served to Polykrates, who then perceived that he could not escape his fate. 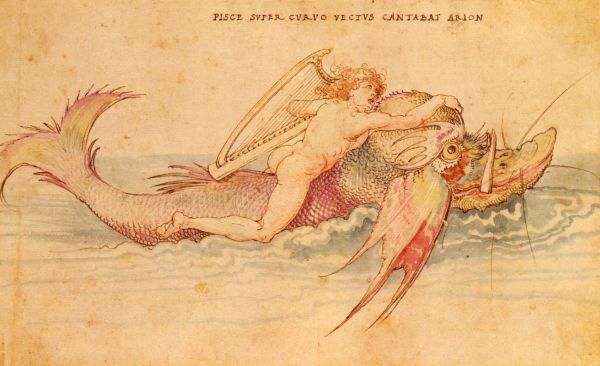 The outcome is a work that can seem incoherently discursive to a casual modern reader; the narrative is not simply linear but ranges forwards and backwards in time with many excurses and digressions; yet this is underpinned by a carefully articulated structure, with the growth of Persian power at its core – the expansion of the Persian empire is traced alongside an exposition of the history, geography and customs of each incorporated population. This structure is further layered by thematic patterning and correspondences around such central themes as retribution and vengeance, hubris and nemesis.

But can we trust what Herodotus tells us? Look for the next instalment of this article to find out.

4 thoughts on “The Greek “fathers of History” – Part II – Herodotus”